Geologists surveyed the ocean floor near Hawaii to make determination 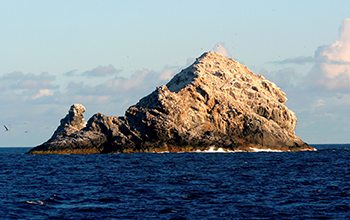 The only remnants of Puhahonu that are now above sea level.

In a recently published study, researchers at the University of Hawaii at Manoa revealed the largest and hottest shield volcano on Earth. A shield volcano is formed of fluid lava flows.

The National Science Foundation-funded team used several lines of evidence to determine that Puhahonu, a volcano in the Papahanaumokuakea Marine National Monument, holds this distinction.

Geoscientists had long thought that Mauna Loa, an active shield volcano on the Big Island of Hawaii, was the largest such volcano.

However, the research team came to a new conclusion after surveying the ocean floor along the Hawaiian leeward volcano chain, chemically analyzing the region’s rocks, and modeling the results.

"It's been proposed that hotspots producing volcano chains like Hawaii undergo progressive cooling over 1-2 million years, and then die," said Michael Garcia, lead author of the study. "However, we've learned that hotspots can undergo pulses of melt production. A small pulse created the Midway cluster of now-extinct volcanoes and another, much bigger one created Puhahonu. This will rewrite the textbooks on how mantle plumes work."

The study shows that Hawaii volcanoes, not only now but for millions of years, have been spewing some of the hottest magma on Earth.

"Although the volcanic Hawaiian-Emperor seamount chain has been studied extensively, it still has much to tell us about how melt rising within the Earth feeds large eruptions on the surface," said Debbie Smith, a program director in NSF's Division of Ocean Sciences.