Southern part of northern anchovy's range could be uninhabitable by 2100 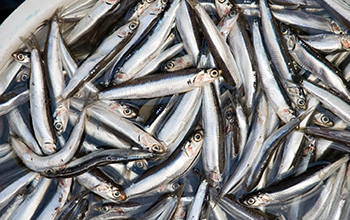 Anchovies are small fish that form a major part of the diet of many marine animals.

A new study led by University of Washington researchers finds that these species' ability to breathe may be key to where and when they thrive.

The study, published in Science Advances, uses a recent understanding of water breathability and historical data to explain northern anchovy population cycles over periods of time. The results for this important fish could apply to other species in the California Current.

The National Science Foundation-funded study shows that species respond to how breathable the water is -- a combination of the oxygen levels in the water and the species' oxygen needs. Anchovy historical data match this pattern and suggest that the southern part of the anchovy's range could be uninhabitable by 2100.

"Climate change isn't just warming the oceans, it’s causing oxygen to decrease, which could force fish and other ocean animals to move away from their normal range to find higher-oxygen waters," Howard said.

Anchovy populations are known to cycle through time, but the reasons have been mysterious. Explanations that focused on food supplies, predator-prey interactions, competition with other species, and temperature preferences failed to fully explain the anchovy population cycles from the 1950s to today, which have been carefully recorded.

"This study demonstrates on a timescale of decades that a species is responding in close alignment with this metabolic index -- how breathable the ocean in its habitat has become," said senior author Curtis Deutsch. "It adds a new, independent line of verification that species in the ocean are arranged in accordance with how breathable their habitats are."

Added Mete Uz, a program director in NSF's Division of Ocean Sciences, "These results highlight the value of transcending disciplinary boundaries and approaching facets of a problem such as ocean circulation, physiology and ecology as interacting elements of a unified Earth system."