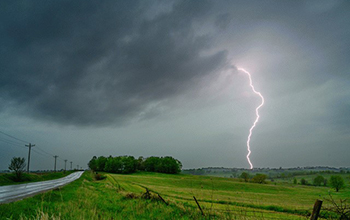 Spring rains wash away some pollen, but not all. Pollen can remain airborne for hours after a storm.

Springtime rains can be a surprising source of pollen, according to research supported by the National Science Foundation.

University of Iowa researchers report that tree pollen fragments remain in the air for as many as 11 hours after heavy rains, and those granules can make their way deep into human lungs, potentially exacerbating allergies.

The researchers base their findings on first-time direct measurements of pollen fragment concentrations during and after spring rains of varying severity in 2019.

"Our results show that, while pollen grains decrease substantially during rain, peak concentrations of submicron pollen fragments occur during rain events and then persist for several hours," says Elizabeth Stone, corresponding author of a paper published in the journal Environmental Science & Technology Letters. "People who are sensitive to pollen in season should avoid going outdoors during rain events, especially thunderstorms, and for several hours afterward."

Pollen grains are hardy, but they can rupture when subjected to high humidity. This happens during rains when a storm's updraft carries the grains to the cloud base, where humidity is high. The fragments are then shot back toward the surface by falling rain and the storm's downdraft.

Stone and her team directly measured pollen from rain events in Iowa City, Iowa, between April 17 and May 31, 2019. The period was in prime tree pollen season. The researchers recorded rain on 28 days.

"Our study shows clearly that rain decreases intact pollen concentrations, but it can also increase pollen fragments," says Stone. "The interesting thing about the pollen fragments is the really high concentrations only last for a short period of time, primarily when it's raining and during the peak of the storm."

Adds Sylvia Edgerton, a program director in NSF's Division of Atmospheric and Geospace Sciences, "Pollen can pose significant health risks to populations with respiratory diseases, so understanding when and why high levels of pollen fragments occur will help provide early warning for protecting sensitive people."