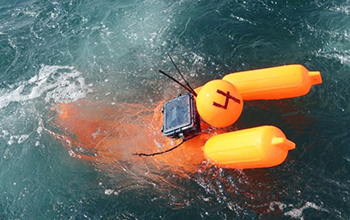 When an object or person goes missing at sea, the complex, constantly changing conditions of the ocean can confound and delay critical search-and-rescue operations.

Now researchers at the Massachusetts Institute of Technology, the Woods Hole Oceanographic Institution, Virginia Tech and other institutions have developed a technique they hope will help first responders quickly zero in on regions of the sea where missing objects or people are likely to be. The results of the National Science Foundation-funded study are published in the journal Nature Communications.

The technique is a new algorithm that analyzes ocean conditions such as the strength and direction of ocean currents, surface winds, and waves, and identifies in real time the regions of the ocean where floating objects are likely to converge.

The team demonstrated the technique in several field experiments in which they deployed drifters and human-shaped mannequins in various locations in the ocean. They found that over the course of a few hours, the objects migrated to the regions the algorithm predicted based on the current ocean conditions.

The algorithm can be applied to existing models of ocean conditions in a way that allows rescue teams to quickly uncover hidden "traps," where the sea may be steering missing people at a given time.

"This new tool can be run on various models to see where these traps are predicted, and thus the most likely locations for a stranded vessel or missing person," says Thomas Peacock, a mechanical engineer at MIT. "The method uses data in a way that it hasn’t been used before, so it provides first responders with a new perspective."