A rising tide of marine disease? How parasites respond to a warming world

Warming events are increasing in magnitude and severity, threatening ecosystems 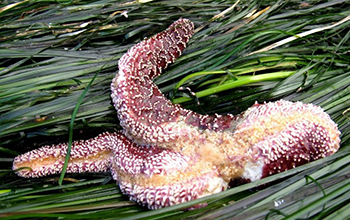 Warming events are increasing in magnitude and severity, threatening many ecosystems worldwide. As global temperatures climb, uncertainties increase about the relationship, prevalence, and spread of parasites and disease.

A National Science Foundation-funded study by University of Washington scientists explores the ways parasites will respond to climate change, providing researchers new insights into disease transmission. Their paper was published in Trends in Ecology and Evolution.

"Much of what is known about how organisms and ecosystems respond to climate change has focused on gradual warming," said lead author Danielle Claar. "Climate change causes not only gradual warming over time, but increases the frequency and magnitude of extreme events, like heat waves."

Claar said that both gradual warming and pulse warming have influenced ecosystems, but they do so in different ways. Organisms may be able to adapt and keep pace with gradual warming, but an acute event can have sudden and profound impacts.

One such extreme heat pulse event was the 2013-2015 "blob," which has been linked to a die-off of sea stars along the Pacific coast of the U.S. and Canada. Many species of sea stars, including the large sunflower sea star, were decimated by a sudden epidemic of wasting disease.

Five years later, sea star populations in the region are still struggling to recover. The abnormally warm waters associated with the blob are thought to have favored the spread of the densovirus, the suggested cause of the disease.

"This research highlights that extreme events and maximum temperatures are often much more important than average conditions in determining how organisms respond to climate change," says Dan Thornhill, a program director in NSF's Division of Ocean Sciences.