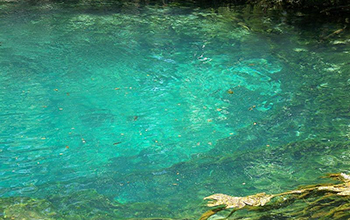 Like oxygen, the Floridan Aquifer falls into the category of things we can’t see but also cannot live without.

One of the largest and most productive aquifers in the nation, it provides drinking water for 10 million people in Florida, Georgia and Alabama. It also feeds hundreds of crystal-clear springs, several that are home to manatees in Florida’s chilly months and provide recreation for humans year-round.

This ecosystem at least 1,000 feet beneath the surface faces a slew of threats, from sea level rise, to nutrient pollution from agriculture, to urban development.

Now a National Science Foundation-funded study published in the journal mBio is the first to characterize the viruses and prokaryotes (bacteria and archaea) that live in the Floridan Aquifer.

By comparison, scientists know volumes more about viruses and bacteria that live in the ocean. "It really shocked us that this hasn't been done before," said senior study author Mya Breitbart of the University of South Florida.

The team, whose field and lab work were led by USF researcher Kema Malki, used an inflatable raft to retrieve samples from five springs across northern Florida that serve as a mirror for the Floridan Aquifer as a whole.

The scientists used microscopy and genetic techniques to investigate the abundance and composition of viruses and prokaryotes in the spring water and assessed health-related water quality parameters such as nutrient concentrations and dissolved oxygen levels.

The five springs were the Ichetucknee, Jackson, Manatee, Rainbow and Volusia. Each spring discharges more than 246 million liters of water every day -- the volume that would be needed to fill 100 Olympic-sized swimming pools.

Varying nutrient concentrations, and distinct bacterial and viral communities, are related to differences in land use around each of the springs, the scientists found. For example, the waters feeding Jackson spring are surrounded by forests and agricultural lands while Volusia has the most urbanized springshed, an area of land that contributes groundwater to a spring. The bacterial and viral counts in Volusia were ten times higher than those at the other sites.

"This research team, known for uncovering the abundance of viruses in the ocean, has now shown that viruses in Florida's inland freshwater habitats may have a different role to play compared to their marine counterparts," says Matt Kane, a program director in NSF's Division of Environmental Biology.