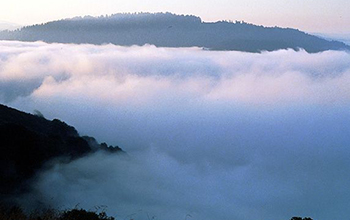 Redwood forests in California, the Atacama Desert in Chile and the Namib Desert in Namibia need fog.

A new National Science Foundation-funded study led by ecohydrologists at Indiana University has shown for the first time that it's possible to use satellite data to measure the threat of climate change to ecosystems that depend on water from fog.

The results, published in Geophysical Research Letters, present the first clear evidence that the relationship between fog levels and vegetation status can be measured using remote sensing. The discovery opens the potential to assess fog's impact on ecological health across large land masses.

"It's never been shown before that you can observe the effect of fog on vegetation from outer space," said Lixin Wang, senior author of the study. "The ability to use satellite data for this purpose is a major technological advance."

The need to understand the relationship between fog and vegetation is urgent; environmental change is reducing fog levels across the globe. The shift most strongly affects regions that depend on fog as a major source of water, including the redwood forests in California, the Atacama Desert in Chile and the Namib Desert in Namibia.

"The loss of fog endangers plant and insect species in these regions, many of which don't exist elsewhere in the world," said Na Qiao, the study's first author. "The impact of fog loss on vegetation is very clear. If we can couple this data with large-scale impact assessments based on satellite data, they could potentially influence environmental protection in these regions."

The study found a significant correlation between fog levels and vegetation status. Among other findings, the data revealed obvious signs of plant greening following fog, with a difference of up to 15% during periods of fog versus periods without fog.

"We don't always appreciate how important fog is, but it's a critical source of water for many ecosystems," says Laura Lautz, a program director in NSF's Division of Earth Sciences. "Now, for the first time, we can see how plants respond to fog at large scales using satellite data. This opens the opportunity to quantify how these systems will respond to environmental change in the future."