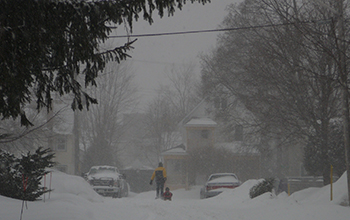 Across North America, snow could largely be a thing of the past by the end of the century.

A National Science Foundation study led by Northern Illinois University scientists suggests that American winters late this century could experience significant decreases in the frequency, intensity and size of snowstorms.

Under an unabated greenhouse gas emissions scenario, the study projects 28% fewer snowstorms on average per year over central and eastern portions of North America by the century's last decade, with a 33% reduction in the amount of snow or frozen precipitation and a 38% loss in average snowstorm size.

"If we do little to mitigate climate change, the winter season will lose much of its punch in the future," said Walker Ashley, an NIU meteorologist and lead author of the study, published in Nature Climate Change.

"The snow season will start later and end earlier," Ashley said. "Generally, what we consider an abnormally mild winter now, in terms of the number and intensity of snowstorms, will be the harshest of winters late this century. There will be fewer snowstorms, less overall precipitation that falls as snow and almost a complete removal of snow events in the southern tier of the United States."

Ashley and NIU meteorologist Victor Gensini, along with Alex Haberlie of Louisiana State University, used a supercomputing data set created by researchers at the National Center for Atmospheric Research to study how climate change will impact future wintry weather.

The researchers tracked snowstorms for 12 seasons in the early part of this century, establishing a control sample that was representative of actual observations. They then tracked snowstorms to see how those winter events would change in a climate that was warmer by about 5 degrees Celsius (9 degrees Fahrenheit). That temperature increase is predicted for the late 21st century by averaging 19 leading climate models in an upper-limit greenhouse gas emissions scenario.

The study is believed to be the first to objectively identify and track individual snowstorm projections of the distant future -- from minor snow accumulations to average winter storms to crippling blizzards.
"What would today's snowstorms -- the storms of particular days in particular locations -- look like in a warmer world?" asks Eric DeWeaver, a program director in NSF's Division of Atmospheric and Geospace Sciences. "This study gives you a feel for what climate change could look like in your own backyard."