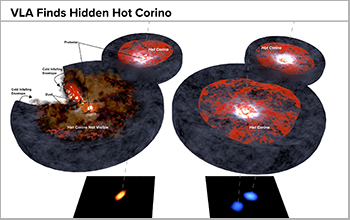 Astronomers acting on a hunch have likely resolved a mystery about young, still-forming stars and the regions rich in organic molecules closely surrounding some of them. The scientists used the National Science Foundation's Karl G. Jansky Very Large Array to reveal one such region that had previously eluded detection, and that revelation answered a long-standing question.

The regions around the young protostars contain complex organic molecules that can further combine into prebiotic molecules that are the first steps on the road to life. The regions, dubbed "hot corinos" by astronomers, are typically about the size of our solar system and are much warmer than their surroundings, though still quite cold by terrestrial standards.

The first hot corino was discovered in 2003, and only about a dozen have been found so far. Most of these are in binary systems, with two protostars forming simultaneously.

Astronomers have been puzzled by the fact that they have found evidence in some of these binary systems for a hot corino around one of the protostars but not the other.

"We know that dust blocks those wavelengths, so we decided to look for evidence of these chemicals at longer wavelengths that can easily pass through dust," said Claire Chandler of the National Radio Astronomy Observatory, and principal investigator on the project. "It struck us that dust might be what was preventing us from detecting the molecules in one of the twin protostars."

The result confirmed the astronomers' hunch. They reported their findings in Astrophysical Journal Letters.