Permafrost soil types can be predicted based on the surrounding landscape 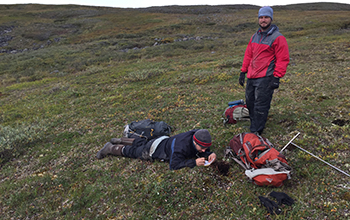 The Arctic covers about 20% of the planet. But almost everything hydrologists know about the carbon-rich soils blanketing its permafrost comes from very few measurements taken just feet from Alaska's Dalton Highway.

The small sample size is a problem, particularly for scientists studying the role of Arctic hydrology on climate change. Permafrost soils hold vast amounts of carbon, which could turn into greenhouse gases. But the lack of data makes it difficult to predict what will happen to water and carbon as warming temperatures melt permafrost.

New National Science Foundation-funded research led by scientists at the University of Texas at Austin may help solve that problem. The work was conducted at NSF's Arctic Long-Term Ecological Research site.

The scientists spent the past four summers measuring permafrost soils across a 5,000-square-mile swath of Alaska's North Slope, an area about the size of Connecticut. While working to build up a much-needed soil dataset, their measurements revealed an important pattern: The hydrologic properties of different permafrost soil types are very consistent and can be predicted based on the surrounding landscape.

"There is a vast swath of land that is eminently predictable," said researcher Michael O'Connor. "Over an enormous study area, the very simple patterns in these properties hold true."

The study was published in the journal Geophysical Research Letters.

The researchers examined nearly 300 soil samples from different types of terrain. They found that soil types and their thickness are closely associated with the landscape. The scientists classified the landscapes into five categories based on the dominant vegetation and whether the environment was on a hill slope or near the bottom of a river valley.

"Given the enormous expanse, inaccessibility and importance of the Arctic's tundra, it's helpful to know we can accurately predict its soil types from afar," says Doug Levey, a program director in NSF's Division of Environmental Biology.