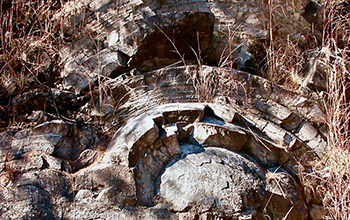 These fossil stromatolites in South Africa contained records of early life central to the research.

Oxygen first accumulated in the Earth's atmosphere about 2.4 billion years ago, during the Great Oxidation Event. A long-standing puzzle has been that geologic clues suggest early bacteria were photosynthesizing and pumping out oxygen hundreds of millions of years before then. Where was it all going?

Something was holding back oxygen's rise. A new interpretation of rocks billions of years old finds that volcanic gases are the likely culprits. The study, led by University of Washington scientists and funded by the National Science Foundation, was published in the journal Nature Communications.

Multicellular life needs a concentrated supply of oxygen, so the accumulation of oxygen is key to the evolution of oxygen-breathing life on Earth.

"If changes in the mantle controlled atmospheric oxygen, the mantle might ultimately set a tempo of the evolution of life," Kadoya said.

That has implications for understanding the emergence of complex life on Earth and the possibility of life on other planets.

"The study indicates that we cannot exclude the mantle of a planet when considering the evolution of the surface and life of a planet," Kadoya said.

Added Robin Reichlin, a program director in NSF's Division of Earth Sciences, "This research emphasizes the importance of understanding Earth systems at the planetary scale."