Discovery has important implications regarding development of Maya civilization 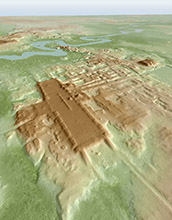 From the ground, it's impossible to tell that the plateau underfoot is something extraordinary. But laser imaging and radiocarbon dating revealed a huge structure, which turned out to be the largest and oldest Mayan monument ever discovered.

The discovery by National Science Foundation-funded researchers from the University of Arizona suggests that the Maya civilization developed more rapidly than archaeologists once thought and hints at greater social equality at the time of construction than in later periods.

Located in Tabasco, Mexico, near the northwestern border of Guatemala, the site of Aguada Fénix lurked beneath the surface, hidden until 2017. The monument measures nearly 4,600 feet long (nearly one mile), ranges from 30 to 50 feet high and includes nine wide causeways.

The team's findings are published in the journal Nature.

"Using low-resolution lidar collected by the Mexican government, we noticed this huge platform. Then we did high-resolution lidar and confirmed the presence of a big building," said Takeshi Inomata, one of the team's leaders.

The team excavated the site and radiocarbon-dated 69 samples of charcoal to determine that the building was constructed sometime between 1000 and 800 B.C.

The oldest monumental building at Aguada Fénix turned out to be the largest known in the entire Maya history, far exceeding pyramids and palaces of later periods.

The discovery has important implications for understanding Maya civilization. First, archaeologists have traditionally thought that the civilization developed gradually, with small villages beginning to appear between 1000 and 350 B.C. The fact that monumental buildings existed earlier than thought and were constructed when Maya society had greater equality makes archaeologists rethink the construction process.

"During later periods, there were powerful rulers and administrative systems in which the people were ordered to do the work. But this site is much earlier, and we don't see the evidence of the presence of powerful elites. We think that it's more the result of communal work," Inomata said.

Second, the site looks similar to the older, Olmec civilization center of San Lorenzo. But the lack of stone sculptures related to rulers and elites, such as colossal heads and thrones, suggests less social hierarchy than in San Lorenzo and highlights the importance of communal work in the earliest days of the Maya.

"It's not just hierarchical social organization with the elite that makes monuments like this possible," Inomata said. "This kind of understanding gives us important implications about human capability, and the potential of human groups. You may not necessarily need a well-organized government to carry out these kinds of huge projects. People can work together to achieve amazing results."