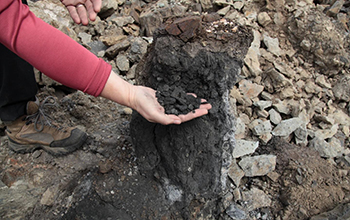 A lump of coal weathering in Siberian flood basalts in a quarry near the town of Ust Ilimsk.

A team of researchers led by Arizona State University geoscientist Linda Elkins-Tanton has provided the first direct evidence that extensive coal burning in Siberia was a cause of the Permo-Triassic extinction 252 million years ago. It was Earth's most severe extinction event. The results of the study are published in the journal Geology.

For the National Science Foundation-funded research, the scientists focused on the rocks of the Siberian Traps, a region of volcanic rock in Russia. The massive eruptive event that formed the traps is one of the largest known volcanic events in the last 500 million years. The eruptions continued for roughly 2 million years and spanned the Permian-Triassic boundary. Today, the area is covered by about 3 million square miles of basaltic rock.

This is ideal ground for researchers seeking an understanding of the Permo-Triassic extinction event, which affected all life on Earth. During this event, up to 96% of marine species and 70% of terrestrial vertebrate species became extinct.

Calculations of seawater temperature indicate that at the peak of the extinction, the Earth underwent lethally hot global warming, in which equatorial ocean temperatures exceeded 104 degrees Fahrenheit. It took millions of years for ecosystems to be re-established and for species to recover.

Among the possible causes of the extinction is massive coal-burning that led to catastrophic global warming, which was devastating to life. To search for evidence, Elkins-Tanton began looking at the Siberian Traps region, where it was known that the magmas and lavas from volcanic events burned a combination of vegetation and coal.

The search eventually led the team to outcrops near the Angara River. "We found towering river cliffs of volcaniclastics lining the river for hundreds of miles," Elkins-Tanton said. "It was geologically astounding."

The changes parallel what is happening on Earth today, the scientists said, including burning hydrocarbons and coal, acid rain from sulfur, and ozone-destroying halocarbons.