Species could hold a cure for melanoma, the most dangerous type of skin cancer 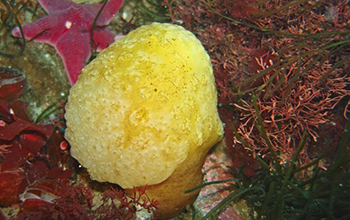 Ascidians, or "sea squirts," may hold the keys to a new anticancer compound.

Could the cure for melanoma -- the most dangerous type of skin cancer -- be a compound derived from a marine invertebrate that lives at the bottom of the ocean? National Science Foundation-funded scientists led by Alison Murray of the Desert Research Institute in Reno, Nevada, think so.

They're looking to the microbiome of an Antarctic ascidian called Synoicum adareanum to better understand the possibilities for development of a melanoma-specific drug.

Ascidians, or "sea squirts," are primitive, sac-like marine animals that live attached to ocean bottoms around the world and feed on plankton by filtering seawater.

S. adareanum, which grows in small colonies in the waters surrounding Antarctica, contains a bioactive compound called "palmerolide A," which has promising anti-melanoma properties. Researchers believe that the compound is produced by bacteria that are naturally associated with S. adareanum.

In a new paper published in the journal Marine Drugs, Murray and collaborators at the University of South Florida, the Los Alamos National Laboratory, and the Université de Nantes, France, present new findings on the bacteria that make up the microbiome of S. adareanum.  The scientists measured palmerolide levels in samples collected from Antarctica's Anvers Island Archipelago.

"Our longer-term goal is to figure out which of the many bacteria in this species are producing palmerolide, but to do this, there is a lot we need to learn about the microbiome of S. adareanum," Murray said. "Our new study describes the many advances we've made toward that goal."