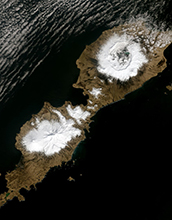 An international team of scientists has found evidence connecting an unexplained period of extreme cold in ancient Rome with an unlikely source: a massive eruption of Alaska's Okmok volcano, located on the opposite side of the Earth.

Around the time of Julius Caesar's death in 44 BCE, written sources describe a period of unusual cold, crop failures, famine, disease and unrest in the Mediterranean region -- impacts that ultimately contributed to the downfall of the Roman Republic and Ptolemaic Kingdom of Egypt. Historians have long suspected a volcano as the cause but have been unable to pinpoint where or when such an eruption had occurred, or how severe it was.

In a National Science Foundation-funded study published in Proceedings of the National Academy of Sciences, a team of scientists led by Joe McConnell of the Desert Research Institute in Reno, Nevada, used an analysis of tephra (volcanic ash) found in Arctic ice cores to link the period of unexplained extreme climate in the Mediterranean with the caldera-forming eruption of Alaska's Okmok volcano in 43 BCE.

"To find evidence that a volcano on the other side of the Earth erupted and effectively contributed to the demise of the Romans and the Egyptians and the rise of the Roman Empire is fascinating," McConnell said. "It shows how interconnected the world was even 2,000 years ago."

New measurements were made on ice cores from Greenland and Russia, some of which were drilled in the 1990s and archived in the U.S., Denmark and Germany. Using these and earlier measurements, the scientists clearly delineated two distinct eruptions -- a powerful but short-lived, relatively localized event in early 45 BCE, and a much larger and more widespread event in early 43 BCE with volcanic fallout that lasted more than two years.

The researchers conducted a geochemical analysis of the tephra samples from the second eruption found in the ice, matching the tiny shards with those of the Okmok II eruption in Alaska -- one of the largest eruptions of the past 2,500 years.

"We know how disruptive volcanic eruptions can be locally, and it is fascinating to see an innovative study that demonstrates the global impacts of these events in historic contexts," says Colleen Strawhacker, a program director in NSF's Office of Polar Programs.