Is teleportation possible? Yes, in the quantum world 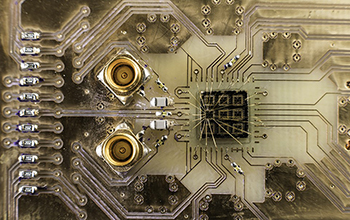 "Beam me up" is one of the most famous catchphrases from the "Star Trek" series. It’s the command issued when a character wishes to teleport from a remote location back to the Starship Enterprise.

Last year, scientists confirmed that information could be passed between photons on computer chips even when the photons were not physically linked. Now, according to National Science Foundation-funded research by University of Rochester and Purdue University scientists, teleportation may also be possible between electrons.

In a paper published in Nature Communications and one to appear in Physical Review X, the researchers, including Rochester physicists John Nichol and Andrew Jordan, explore new ways of creating quantum-mechanical interactions between distant electrons.

The research is an important step in improving quantum computing, the scientists say, and has the potential to revolutionize technology, medicine and science by providing faster and more efficient processors and sensors.

Quantum teleportation is a demonstration of what Albert Einstein famously called "spooky action at a distance" -- also known as quantum entanglement. In entanglement, one of the basic of concepts of quantum physics, the properties of one particle affect the properties of another, even when the particles are separated by a large distance.