Shapes of volcanoes and their craters provide information on their formation 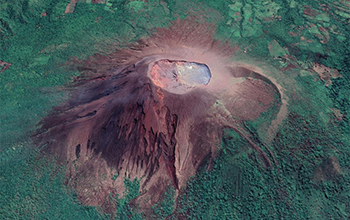 The shapes of volcanoes and their craters provide critical information on their formation and eruption history. Techniques applied to photographs -- photogrammetry -- show promise in correlating shape change to volcanic background and eruption activity.

The changes in volcano shape that occur with major eruptions are quantifiable, but background volcanic activity, manifesting as small volume explosions and crater wall collapse, can also cause changes in shape and size and are not well quantified, researchers say. The scientists used techniques in this research that enabled them to quantify background volcanic activity.

A team of Penn State researchers studied Telica Volcano, an active volcano in western Nicaragua, to observe and measure small-scale changes in its crater associated with background and eruption activity. Geologists consider Telica persistently active because of its high levels of seismicity and volcanic degassing, and indeed it erupts frequently.

The team used direct observations of the crater, photographic observations from 1994 to 2017, and photogrammetric techniques on photos collected between 2011 and 2017 to analyze changes at Telica in the context of summit crater formation and eruption processes.

They reported their results in the American Geophysical Union journal Geochemistry, Geophysics, Geosystems.

"We could see the changes by looking at the photos, but by employing SfM, we could quantify how much change had occurred at Telica," said Peter La Femina, a geoscientist at Penn State. "This is one of the first studies to look at changes in crater morphology associated with background and eruptive activity over a relatively long time span, almost a 10-year period."

Added Dennis Geist, a program director in NSF's Division of Earth Sciences, "Anytime you can measure something beyond simple observations, it helps lead to a better understanding of processes, particularly with volcanoes."