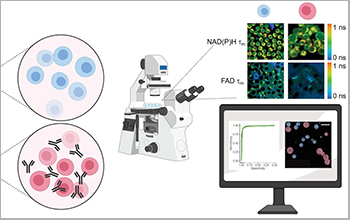 A new technique differentiates T cells in a quiet state and activated by antibody-stimulation.

T cells are the immune soldiers at the frontline of the battle with infiltrating pathogens that seek to cause disease. A new study published in Nature Biomedical Engineering describes a novel, label-free imaging technique that can differentiate active T cells from those off duty.

"T cells have a metabolic switch that regulates their activity," says Melissa Skala, a biomedical engineer at the University of Wisconsin-Madison. In a healthy individual, most T cells are in a quiescent state -- they're inactive, but ready and waiting for the signal to join in active combat against invading viruses or bacteria.

Most methods for characterizing T cells are antibody-based, such as flow cytometry or immunohistochemistry. These require staining with antibodies or contrast agents, a process that is destructive to the cells.

Alternatively, the new method detects autofluorescence from molecules within the cell that naturally emit light when imaged by a microscope paired with an infrared laser. This label-free process is non-damaging and doesn't alter the behavior of the cell. The technique could be adapted for a range of imaging -- from cells in a plate or dish, to larger tissue samples, or even to a complete organism, as in vivo imaging.

Images of the quiescent cells versus the activated cells revealed differences in metabolic function, most notably through a change in autofluorescence in the activated T cell populations. The researchers also observed that active T cells were slightly larger in size than quiescent cells.

The activation protocol and imaging capabilities will be useful for manufacturing the CAR-T cells used in immunotherapies, the researchers say. These re-engineered T cells are often co-cultured with other cells, such as cancer cells, to test their reactivity.

However, using additional harsh reagents or antibody-labels to further characterize the T cell is a problem for CAR-T cell manufacturers. The autofluorescent approach provides an attractive way to perform those experiments by imaging the same cells across multiple timepoints in a way that's non-damaging.

"This benign autofluorescence technique for imaging T Cells, which works without causing them any harm, is very exciting," says Sarit Bhaduri, a program director in NSF's Directorate for Engineering. "We're looking forward to more such breakthroughs from this NSF Engineering Research Center."