Brittlebush is responding well to increased temperature and aridity 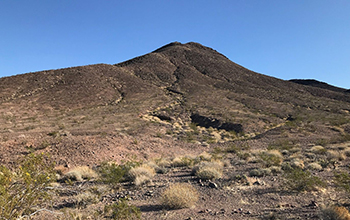 A desert shrub called brittlebush is responding well to increased temperature and aridity.

Death Valley doesn't seem like the best place to ride out rising temperatures amid a changing climate. But for the desert plants that live there, it's home -- and they face the choice to adapt or die.

Research by ecologists at the University of Utah shows that one shrub, the brittlebush, is adapting, showing a remarkable ability to respond to increased temperature and aridity. The research is published in Proceedings of the National Academy of Sciences and was funded by the U.S. National Science Foundation.

"We were able to directly relate changes in plant ecophysiology to changing climate over a relatively short timescale," says study lead author Avery Driscoll. "This shows us that desert shrubs can and do acclimate to changing environmental conditions."

Data for this study came from two long-term research sites in the remote deserts of the U.S. Southwest -- one in Death Valley and the other near Oatman, Arizona, each with an area of a few hundred square meters.

The sites were established in the early 1980s by biologist Jim Ehleringer, who recognized the value of long-term observations. Every spring for nearly 40 years, Ehleringer and colleagues have visited the sites to survey the vegetation and collect samples of plants for later analysis.

In 2020, a survey trip still went forward, though postponed and scaled-down because of the pandemic. "It's easy to distance when working in the wide-open of the Mojave," said co-author Darren Sandquist.

The study focuses on one shrub species in particular: Encelia farinosa, also called brittlebush or incienso. It can live more than 30 years and is found widely throughout the U.S. Southwest and northern Mexico, displaying bright yellow flowers and silvery leaves.

Does this finding mean that the brittlebush and other desert shrubs will be able to weather future warming? No one yet knows, according to Driscoll.

"While it's possible that more efficient use of water could translate into growth, survival or flowering benefits for these plants, we don't know if the change will confer advantages or mitigate potential declines in the population," Driscoll said.

Added Betsy von Holle, a program director in NSF's Division of Environmental Biology, "This study underscores the value of long-term research for ecology. The team was able to gain insights into plant physiological responses to climate change because of the ability to collect data over nearly four decades."