The secret beneath seemingly trustworthy volcanoes

Some volcanoes hide magmas with potential to generate explosive activity 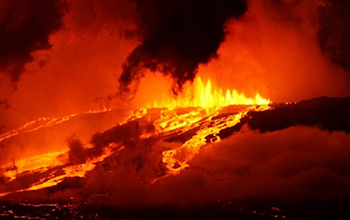 The 2015 eruption of Wolf Volcano in the Galapagos Islands archipelago.

Geologists working on remote islands in the Galapagos archipelago have found that volcanoes that produce small basaltic lava eruptions hide chemically diverse molten rock in their underground plumbing systems -- including some with the potential to generate explosive activity.

"I think of these as fugitive magmas," says Dennis Geist, a geologist at the U.S. National Science Foundation and a member of the team. The scientists published their results in Nature Communications.

The types of eruptions produced by many volcanoes are similar over millions of years. For example, volcanoes in Iceland, Hawaii and the Galapagos Islands consistently erupt molten basaltic rock that forms long rivers of fire.

Although this lava flow is potentially damaging to houses close to the volcano, the flow generally moves at a walking pace and does not pose the same risk to life as larger explosive eruptions, such as those of Vesuvius or Mount St. Helens. This long-term consistency in a volcano’s eruptive behavior informs hazard planning by local authorities, according to Geist.

The research team studied two Galapagos volcanoes that have erupted only uniform basaltic lava flows over their lifetimes. By deciphering the compositions of microscopic crystals in the lavas, the team was able to reconstruct the chemical and physical characteristics of magma stored underground beneath the volcanoes.

The results of the study show that magmas beneath these volcanoes are extremely diverse and include compositions similar to those that erupted at Mount St. Helens.

These chemically diverse magmas could become mobile and ascend toward the surface under certain circumstances. Volcanoes that have reliably produced basaltic lava eruptions for millennia might undergo unexpected changes to more explosive activity in the future.