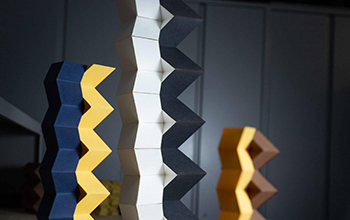 Origami, an ancient Japanese art form, has motivated researchers to explore its many applications.

The simplicity and elegance of origami, an ancient Japanese art form, has motivated engineers to explore its application in the world of materials.

New research by an interdisciplinary team, including Northwestern University's Horacio Espinosa and Sridhar Krishnaswamy and the Georgia Institute of Technology's Glaucio Paulino, aims to advance the creation and understanding of such folded structures for applications ranging from soft robotics to medical devices to energy harvesters.

Energy harvesting is the process by which energy is derived from external sources such as solar power or wind energy.

Inspired by origami, mechanical metamaterials -- artificial structures with mechanical properties defined by their structure rather than their composition -- have gained attention for their potential to yield deployable and highly tunable structures and materials.

What wasn't known was which structures integrate shape recoverability, directional mechanical properties, and reversible auxeticity -- meaning their lateral dimensions can increase and then decrease when progressively squeezed.

Though some 3D origami structures have been produced through manufacturing, achieving the folding properties displayed in ideal paper origami remained a challenge.

The U.S. National Science Foundation-funded study presents new avenues to be explored in the long term, Espinosa said. "There are a number of possibilities. One is the fabrication of origami structures with ceramic and metallic materials. Another is the use of piezoelectric polymers, which can lead to energy harvesters and power microsurgical tools."

The research results, "Folding at the Microscale: Enabling Multifunctional 3D Origami-Architected Metamaterials," were published in the journal Small.

The ancient art of origami is inspiring NSF-funded research and innovation in a variety of ways, including those highlighted in this video.