Florida Current is weaker now than in the past century 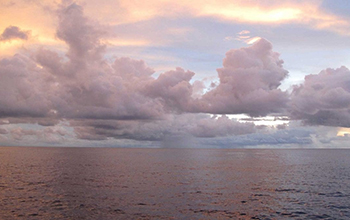 New study uses a method of tracking the strength of near-shore ocean currents from a distance.

A key component of the Gulf Stream has markedly slowed over the past century, influencing Earth's climate -- that's the conclusion of a new research paper in Nature Communications.

The U.S. National Science Foundation-funded study developed a method of tracking the strength of near-shore ocean currents using measurements made at the coast, leading to the new results.

"In the ocean, almost everything is connected," said Christopher Piecuch of the Woods Hole Oceanographic Institution, author of the study. "We can use those connections to look at things in the past or far from shore, giving us a more complete view of the ocean and how it changes across space and time."

Piecuch, who specializes in coastal and regional sea level change, used a connection between coastal sea level and the strength of near-shore currents to trace the evolution of the Florida Current, which forms the beginning of the Gulf Stream.

The Gulf Stream flows north along the Southeast Atlantic Coast of the United States and eventually east into the North Atlantic Ocean, carrying heat, salt and other properties that influence Earth's climate.

Because nearly continuous records of sea level stretch back more than a century along Florida's Atlantic Coast and in some parts of the Caribbean, Piecuch was able to use mathematical models to conclude that the Gulf Stream is weaker now than at any other point in the past 110 years.

The findings offer the potential to monitor ocean currents, such as the Gulf Stream, from the coast.

"If we can monitor something 'over the horizon' by making measurements from shore," he said, "then that's a win for science and potentially for society."

Added Mete Uz, a program director in NSF's Division of Ocean Sciences, "This research illustrates the value of long records. And if direct measurements don't go back far enough, you can use advanced statistical methods on the measurements you do have."