New framework for evaluating snow droughts around the world 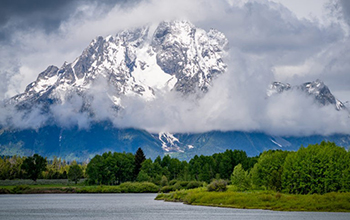 Snowmelt in the Teton Range is a water source for five states through which the Snake River passes.

Scientists at the University of California, Irvine, have developed a new framework for characterizing snow droughts around the world.

Using the tool to analyze conditions from 1980 to 2018, the U.S. National Science Foundation-funded researchers found a 28% increase in the length of snow droughts in the Western United States during the second half of the study period.

The study, published in Proceedings of the National Academy of Sciences, covers results from the application of the new snow water equivalent index and its implications for human populations in impacted regions.

"Snow is an important global water resource that plays a vital role in natural processes, agriculture, hydropower and the basic socioeconomic conditions of various regions," said lead author Laurie Huning. "While other forms of drought are well-studied, variations in snow droughts on a global scale have been examined to a far lesser extent until now."

An analysis using the new framework shows prolonged snow droughts in California, Oregon, Washington and other Western states and, to a lesser extent, Eastern Russia and Europe, over the nearly four-decade term studied.

Decreases in average snow drought severity and duration during the same term were experienced in other regions of the world with populations that rely on meltwater from annual snowfall for basic needs -- the Hindu Kush, Central Asia, and the greater Himalayas in Asia; and the extratropical Andes mountain range and Patagonia in South America.

The team's standardized snow water equivalent index can be tuned to variable timescales, such as 1-month or 3-month periods.

It incorporates information about the amount and persistence of snow water equivalent on the ground and the amount of water stored in the snowpack, which are related to other types of droughts such as meteorological and streamflow declines since precipitation and temperature influence snow accumulation and melt.

According to Huning, this is the first such tool to enable comparisons of drought conditions among regions with variations in climate and snowfall.

"Quantifying snow droughts is important as they can affect ecosystems, water supply and the likelihood of wildfires during summer months, especially in the Western U.S.," says Luciana Astiz, a program director in NSF's Division of Earth Sciences.