Go into the polar night

Scientists release planetarium show on epic expedition to the Arctic 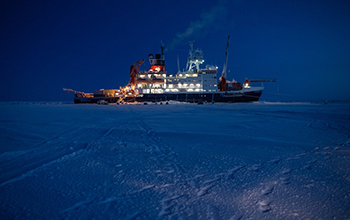 Scientists have released a planetarium show on an epic expedition to the Arctic.

Arctic sea ice groans and creaks as a massive icebreaker slowly churns through frozen waters. Scientists on an ice floe call out to each other in the dark. A chainsaw buzzes as someone cuts through the ice, exposing open ocean below.

That scenario can now reach viewers from Baltimore to Berlin, who can step out onto an ice floe in the middle of the Arctic Ocean, watching and listening as researchers race the fading light on one of the most ambitious international climate expeditions to date: MOSAiC.

The Multidisciplinary Drifting Observatory for the Study of Arctic Climate launched in September 2019. The mission froze an icebreaker into the Arctic Ocean to better understand this remote region and the role it plays in global climate and weather patterns.

Now a 360-degree planetarium dome show about MOSAiC directed by the University of Colorado Boulder, Into the Polar Night, is available at no charge to institutions around the world. Viewers can watch a virtual reality version on YouTube or with VR viewers. The show captures the first three months of the year-long expedition, following as darkness descends, storms swirl, and researchers work to gather data from this harsh and unforgiving environment.

"The U.S. National Science Foundation is pleased to have supported this wonderful glimpse into the unusual circumstances and critical research contributions of the MOSAiC program," said Kelly Falkner, director of NSF's Office of Polar Programs. "The MOSAiC expedition is one the most ambitious international Arctic field missions NSF has ever funded. Its participants have truly ventured 'into the unknown,' and the long-standing observational gaps they are filling promise major advances in our ability to understand the current state and likely future trajectory of the Arctic."