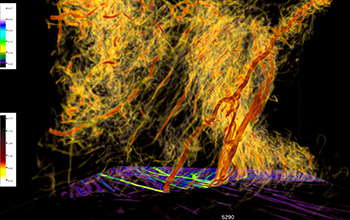 The vorticity field of a multiple-vortex EF5 tornado embedded in a supercell thunderstorm.

At their most extreme, supercell thunderstorms -- those with persistent rotating updrafts -- can spawn tornadoes, causing widespread devastation.

How do tornadoes form? What ingredients do they require? And can they be predicted early enough to provide timely warnings to the public? These are all open questions.

"For about two out of three times when there's a tornado warning issued, there's no tornado," said Leigh Orf, a U.S. National Science Foundation-funded atmospheric scientist at the University of Wisconsin-Madison. "We need to do better for people to heed these warnings."

Overall, the physics of tornadoes is well understood, but the small-scale aspects of their formation and how they are maintained within supercell thunderstorms require more research. Tornadoes cannot be fully studied in a laboratory, however, and field research on these rare, isolated events is difficult to plan.

"We don't have remote sensing technology that can capture the dynamics and physics of full storms with the needed resolution to get to the bottom of their mysteries," Orf said.

For the past decade, Orf has been on the leading edge of efforts to create -- or in some cases re-create -- virtual tornadoes using some of the most powerful supercomputers in the world. He has been using Frontera at the Texas Advanced Computing Center -- a U.S. National Science Foundation-funded supercomputer and the fastest system at any university in the world -- to advance his work.

The software Orf developed is the first to create visualizations of fully resolved tornadoes and their parent supercells that look and behave like those seen in the real world.

"This research would not have been possible without the unique computational capabilities NSF provides for the nation's science and engineering community," said Edward Walker, a program director in NSF's Office of Cyberinfrastructure. "These findings have the potential to save lives by allowing us to better understand how tornadoes form and to predict their occurrences with better accuracy."

Added Chungu Lu, a program director in NSF's Division of Geospace and Atmospheric Sciences, "Computer modeling has become a powerful tool in aiding scientists to understand how tornadoes are generated from their parent storms. It’s critical that computer simulations be conducted at ultra-high resolution, resolving every detail of the process during which a simulated tornado happens. Orf's team is leading the way in this endeavor."

The team presented its recent findings at the American Geophysical Union Fall 2019 meeting and the American Meteorological Society 2020 Annual Meeting.