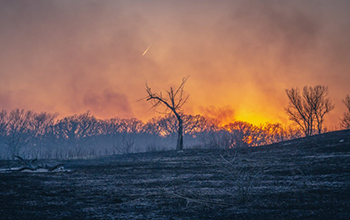 The sun sets over a prescribed burn at the Konza Prairie Biological Station.

When fossil fuel or biomass burns, soot -- also known as black carbon -- fills the air. Black carbon is an important short-term climate driver because it absorbs solar energy and can affect the formation and composition of clouds.

The extent of black carbon's impact on clouds has been the subject of debate for 30 years. A study published in Proceedings of the National Academy of Scientists by Colorado State University atmospheric scientists aims to settle the debate and improve climate models. The research is funded by the U.S. National Science Foundation.

Previous studies done in the laboratory were in conflict about whether black carbon was effective at ice nucleation, a process important to cloud formation. Soot particles, like other types of aerosol particles in the air, can act as the foundation for ice crystal growth. Lab results on soot ranged wildly from no ice nucleation activity to efficient ice formation.

"One reason these results could span such a range is that combustion processes that form black carbon are extremely complicated and differ depending on fuels burned, and on whether combustion is carefully controlled, as in a diesel engine, or uncontrolled, as in wildfires," said Gregory Schill, first author on the study.

Schill and his colleagues simulated the contributions of black carbon ice-nucleating particles versus other natural sources in a global model. They found that black carbon is not as important as previously thought for ice particle formation in mid-level clouds, the clouds most responsible for precipitation over continents.

Natural sources, such as dust and sea spray, have more influence on mid-level cloud properties. These cloud attributes affect climate by reflecting sunlight, releasing precipitation and determining how long the cloud persists.

"Our results suggest that black carbon, regardless of fuel types or combustion conditions, has similar ice formation properties in mid-level clouds," Schill said. "These are less efficient at forming ice compared to other non-anthropogenic sources."

Added Nick Anderson, a program director in NSF's Division of Atmospheric and Geospace Sciences, "The results from this study should help weather and climate models more accurately simulate the impact of black carbon emissions from wildfires on cloud development."