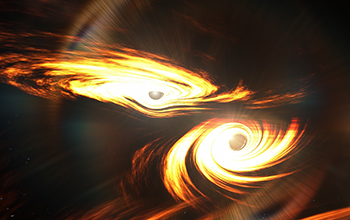 For all its vast emptiness, the universe is humming with activity in the form of gravitational waves. Produced by extreme astrophysical phenomena, these reverberations ripple forth and shake the fabric of space-time, like the clang of a cosmic bell.

Now researchers at MIT and other institutions have detected a signal from what may be the most massive black hole merger yet observed in gravitational waves. The product of the merger is the first clear detection of an "intermediate-mass" black hole, with a mass between 100 and 1,000 times that of the sun.

The scientists detected the signal, which they have labeled GW190521, on May 21, 2019, with two instruments: the U.S. National Science Foundation's Laser Interferometer Gravitational-wave Observatory (LIGO), a pair of identical, 4-kilometer-long interferometers in the United States; and Virgo, a 3-kilometer-long detector in Italy.

The signal, resembling about four short wiggles, is extremely brief, lasting less than one-tenth of a second. From what the researchers can tell, GW190521 was generated by a source that is roughly 5 gigaparsecs away, when the universe was about half its age, making it one of the most distant gravitational wave sources detected so far.

As for what produced the signal, based on a powerful suite of state-of-the-art computational and modeling tools, scientists think that GW190521 was most likely generated by a binary black hole merger with unusual properties.

Almost every confirmed gravitational wave signal to date has been from a binary merger, either between two black holes or two neutron stars. This newest merger appears to be the most massive yet, involving two black holes with masses about 85 and 65 times the mass of the sun.

The merger created an even more massive black hole, of about 142 solar masses, and released an enormous amount of energy, equivalent to around eight solar masses, spread across the universe in the form of gravitational waves.

"LIGO once again surprises us not just with the detection of black holes in sizes that are difficult to explain, but doing it using techniques that were not designed specifically for stellar mergers," says Pedro Marronetti, program director for gravitational physics at NSF. "This is of tremendous importance since it showcases the instrument's ability to detect signals from completely unforeseen astrophysical events. LIGO shows that it can also observe the unexpected."

The researchers reported their findings in Physical Review Letters and in The Astrophysical Journal Letters.