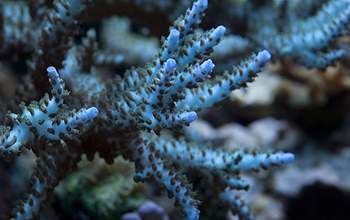 Coral conservation efforts could get a boost from a newly developed genotyping "chip."

Coral conservation efforts could get a boost from a newly developed genotyping "chip" -- the first of its kind for corals.

The chip allows researchers to genetically identify corals and the symbiotic algae that live in the coral's cells, a vital step for establishing and maintaining genetic diversity in reef restoration efforts.

The chip and its accompanying online analysis help "democratize" the genetic identification of coral biodiversity, the scientists say, making it accessible to conservation biologists who might not have access to the laboratory and computational resources needed to extract DNA and analyze the data. The research is funded by the U.S. National Science Foundation.

A paper describing the new chip appears in the journal Scientific Reports.

"Corals around the world are endangered due to warming oceans," said Iliana Baums of Penn State and leader of the research team. "We designed this genotyping chip to help restoration and conservation efforts. There is very little overhead needed to use the chip, so small restoration operations can access coral genetic identification to help them maximize reef health by ensuring that coral populations are genetically diverse."

The chip, also called a microarray, uses more than 30,000 single nucleotide polymorphisms -- locations in the coral genome where, at each of the locations, a single letter in the DNA alphabet can vary among different corals.

The chip was designed using Caribbean corals but can also be used to analyze Pacific species.

"This is a potential game-changer for the field of coral restoration, enabling scientists to efficiently track and monitor disease-resistant corals and their symbionts," says Daniel Thornhill, a program director in NSF's Division of Ocean Sciences.