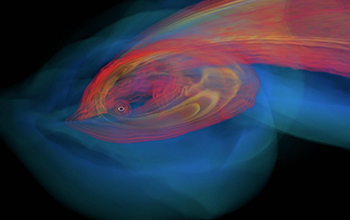 When a star passes too close to a supermassive black hole, tidal forces tear it apart, producing a bright flare of radiation as material from the star falls into the black hole. Astronomers study the light from these "tidal disruption events" (TDEs) for clues to the feeding behavior of the supermassive black holes lurking at the centers of galaxies.

New TDE observations led by U.S. National Science Foundation-funded astronomers at the University of California, Santa Cruz now provide clear evidence that debris from the star forms a rotating disk, called an accretion disk, around the black hole. The work was based on observations obtained at the NSF-funded Southern Astrophysical Research Telescope.

Theorists have debated whether an accretion disk can form efficiently during a tidal disruption event, and the new findings, accepted for publication in The Astrophysical Journal and available online, should help resolve that question, said first author Tiara Hung, a researcher at UC Santa Cruz.

"In classical theory, the TDE flare is powered by an accretion disk, producing X-rays from the inner region where hot gas spirals into the black hole," Hung said. "But for most TDEs, we don't see X-rays -- they mostly shine in the ultraviolet and optical wavelengths -- so it was suggested that, instead of a disk, we're seeing emissions from the collision of stellar debris streams."

Co-authors Enrico Ramirez-Ruiz of UC Santa Cruz and Jane Dai of the University of Hong Kong developed a theoretical model that can explain why X-rays are usually not observed in TDEs despite the formation of an accretion disk. The new observations provide strong support for this model.

"This is the first solid confirmation that accretion disks form in these events, even when we don't see X-rays," Ramirez-Ruiz said. "The region close to the black hole is obscured by an optically thick wind, so we don't see the X-ray emissions, but we do see optical light from an extended elliptical disk."