Measures will likely lower rates of some diseases, but others may increase 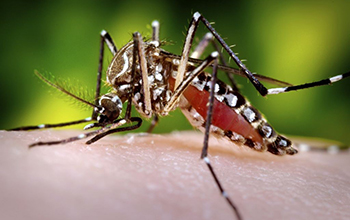 In the face of environmental change, researchers anticipate the rise of mosquito-borne diseases.

All mosquitoes are not created equal.

Different species of the flying pest thrive at various temperature ranges and transmit different diseases. From this starting point, Stanford-led research predicts for the first time how, when and where malaria will ebb -- and that other mosquito-borne diseases, such as dengue fever, will rise dramatically in Sub-Saharan Africa.

The U.S. National Science Foundation-funded research, published in Lancet Planetary Health, warns of a public health disaster if the region fails to expand its focus on malaria to include other mosquito-borne diseases.

"Climate change is going to rearrange the landscape of infectious diseases," said Stanford biologist and study lead author Erin Mordecai. "Chikungunya and dengue outbreaks like we've recently seen in East Africa are becoming more likely across much of the continent. We need to be ready for this emerging threat."

The nighttime-biting Anopheles gambiae mosquito transmits malaria, a disease that affects more than 200 million people in Sub-Saharan Africa and killed more than 400,000 people there in 2018. For years, public health efforts in the region have taken aim at the scourge with insecticide-treated bed nets and indoor spraying, among other measures.

These malaria-focused control strategies, however, do little to combat the daytime-biting Aedes aegypti mosquito, which can transmit devastating diseases such as Rift Valley Fever, yellow fever, Zika, chikungunya and dengue.

As has been done in the Americas, new public health efforts in Sub-Saharan Africa to target Aedes aegypti and dengue, chikungunya and other viruses need to be added to existing malaria control measures, the researchers argue. Increasingly important, they say, is the development of accurate point-of-care diagnostics for dengue and chikungunya viruses, as well as community-based mosquito control, such as trash removal and covering standing water.

"The world is changing in many complex ways," says Sam Scheiner, a program director in NSF's Division of Environmental Biology. "This research is what we need to be able to prepare for those changes."