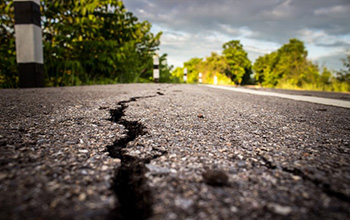 As pulses of high-pressure fluids travel upward along a fault, they can create earthquake swarms.

Earthquakes can be abrupt bursts of home-crumbling, ground-buckling energy, occurring when slices of the planet's crust long held in place by friction suddenly slip and lurch.

"We typically think of the plates on either side of a fault moving, deforming, building up stresses and then -- boom, an earthquake happens," said Stanford University geophysicist Eric Dunham.

But deeper down, these blocks of rock can slide steadily past one another, creeping along cracks in Earth's crust at about the rate your fingernails grow.

A boundary exists between the lower, creeping part of the fault, and the upper portion that may stand locked for centuries. Scientists have puzzled over what controls this boundary, its movements and its relationship with big earthquakes. Chief among the unknowns is how fluid and pressure migrate along faults, and how that migration causes faults to slip.

A new physics-based fault simulator developed by Dunham and colleagues provides some answers. The model shows that faults are gradually weakened by fluids ascending in fits and starts. In the decades leading up to big earthquakes, the fluids seem to propel the boundary, or locking depth, a mile or two upward.

The U.S. National Science Foundation-funded research, published in Nature Communications, also suggests that, as pulses of high-pressure fluids draw closer to the surface, they can trigger earthquake swarms -- strings of quakes clustered in a local area, usually over a week or so.

Shaking from these seismic swarms is often too subtle for people to notice, but not always.  A swarm near the southern end of the San Andreas Fault in California in August 2020, for example, produced a magnitude 4.6 quake, strong enough to rattle surrounding cities.

The simulator maps out how this migration works. Much of the advanced earthquake modeling of the last 20 years has focused on the role of friction in unlocking faults. The new work accounts for interactions between fluid and pressure in the fault zone by using a simplified, two-dimensional model of a fault that cuts vertically through Earth's entire crust, similar to the San Andreas Fault.

"This study is a critical step in understanding the earthquake cycle," says Paul Raterron, a program director in NSF's Division of Earth Sciences. "It explains how fluid pressure can progressively build up in faults and eventually trigger large earthquakes that release it."