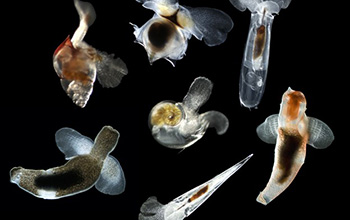 Two groups of tiny, delicate marine organisms -- sea butterflies and sea angels -- were surprisingly resilient in the face of dramatic global climate change and Earth's most recent mass extinction event 66 million years ago, according to U.S. National Science Foundation-funded research published in Proceedings of the National Academy of Sciences.

The paper was co-authored by Erica Goetze, an oceanographer at the University of Hawai‘i at Mānoa.

Sea butterflies and sea angels are pteropods, abundant, floating snails that spend their entire lives in the open ocean. A remarkable example of adaptation to life in the open sea, these animals have thin shells and a snail foot transformed into two wing-like structures that enable them to "fly" through the water ("pteropod" comes from the Greek words for "wing" and "foot").

Sea butterflies have been a focus of environmental change research because they make their shells out of aragonite. Aragonite is a form of calcium carbonate that is 50% more soluble than calcite, which other open ocean organisms use to construct their shells.

Because pteropods' shells are susceptible to dissolving in more acidified ocean water, they have been called "canaries in the coal mine" -- sentinel species that signal the impact of ocean acidification.

With some pteropods having thin shells and others, such as sea angels, having only partial or absent shells, their fossil record is patchy.

Researchers sampled 21 pteropod species and collected information on 2,654 genes. Analyzing these data and key pteropod fossils, the scientists determined that the two major groups of pteropods, sea butterflies and sea angels, evolved in the early Cretaceous, about 139 million years ago, thus must have survived early episodes of ocean acidification.

Knowing whether major groups of pteropods have been exposed to periods of high carbon dioxide is important as researchers attempt to predict how marine species may respond to current and future change.

It is still an open question, scientists say, whether marine organisms, particularly those that calcify, have the evolutionary resilience to adapt fast enough to an increasingly acidified ocean.