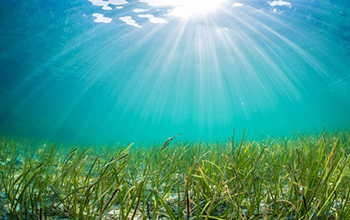 Eelgrass is flourishing in Virginia's bays as a result of a seagrass restoration project.

In the late 1920s, a pathogen began killing seagrasses in Virginia's seaside bays. A 1933 hurricane finished them off. For more than a half-century, the bay bottoms were muddy and barren. Gone were the fish, shellfish, mollusks and other creatures that inhabit healthy seagrass meadows. The scallop industry collapsed.

Today, the seagrasses are again flourishing, fostering clean water and healthy fisheries, thanks to a restoration project conducted by U.S. National Science Foundation-funded ecologists at the Virginia Coast Reserve Long-Term Ecological Research site. The reintroduction of seagrasses into Virginia's coastal bays is proving to be one of the great success stories in marine restoration, the researchers say.

They published their findings in Science Advances.

During the past 21 years, scientists at the University of Virginia and other institutions have spread more than 70 million eelgrass seeds in four previously barren seaside lagoons, spurring a propagation of underwater meadows that has so far grown to almost 9,000 acres. It's the largest eelgrass habitat between North Carolina and Long Island Sound, and the largest seagrass restoration effort globally.

The long-term research shows that the success of the seagrass restoration project is improving water quality, increasing the abundance of fish and shellfish, and -- important to mitigating a warming climate -- capturing carbon from the water and atmosphere and storing it in the extensive root systems of the grasses and in the sediment below.

Marine plants use carbon dioxide in photosynthesis for growth, and capture carbon-rich particles floating in the water. The carbon can remain buried for thousands of years.

"These eelgrass systems are of commercial and recreational value, and influence ecosystem stability," says Francisco (Paco) Moore, a program director in NSF's Division of Environmental Biology. "While this is still a fragile success story, it is one that arises from a long-term investment in developing a basic understanding of seagrass ecosystems."