How'd we get so choosy about friendships late in life? Ask the chimps

Nonhuman animals select whom they socialize with during aging 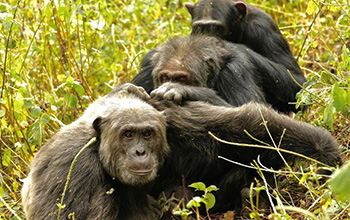 When humans age, we tend to favor small circles of meaningful, already established friendships rather than seeking new ones. People are also more likely to lean toward positive relationships rather than those that bring tension or conflict. No new friends, and no drama.

These behaviors were thought to be unique to humans, but it turns out that chimpanzees, some of our closest living relatives, have these traits, too. That information can help scientists gain a better picture of what healthy aging should look like, and what triggers this social change.

Results of the work, funded in part by the U.S. National Science Foundation, are reported in the journal Science and co-authored by a team of psychologists and primatologists, including researchers at Harvard University.

There is a pressing need to understand the biology of aging, these scientists say, especially with an increasing human life span.

The study draws on 78,000 hours of observations made between 1995 and 2016. Researchers looked at the social interactions of 21 male chimpanzees between the ages of 15 and 58 in Uganda's Kibale National Park. The findings show what is believed to be the first evidence of nonhuman animals actively selecting whom they socialize with as they age.

The researchers looked only at male chimpanzees -- males show stronger social bonds and have more frequent social interactions than do females.

Analyzing a trove of data, the scientists found that the chimpanzees displayed much of the same aging behavior that humans exhibit. The older chimpanzees, for instance, preferred spending more time with -- and grooming -- chimps they had developed mutual friendships with over the years, while younger chimps had more one-sided relationships where grooming wasn't always returned.

Older males were also likely to spend time interacting with their aging friends. And, like older humans looking for some peace and quiet, the chimpanzees also showed a shift from negative interactions to positive ones as they reached their twilight years.

"It is exciting to see longitudinal data like these being leveraged to address questions about aging and behavior in primates," says Rebecca Ferrell, a program director in NSF's Division of Behavioral and Cognitive Sciences. "Although humans take complex behavior to an extreme, comparisons with closely related, long-lived species provide invaluable context for understanding human behavior and the evolution of human life history."