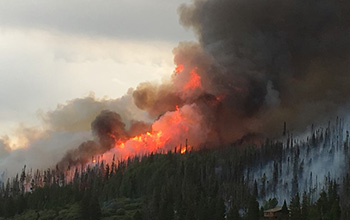 In lab studies of wildfire, nitrous acid seems to be a minor actor, often underrepresented in atmospheric models. But in the real-world atmosphere during wildfires, the chemical plays a leading role.

It spikes to levels significantly higher than scientists expected, driving increased ozone pollution and harming air quality, according to a U.S. National Science Foundation-supported study led by researchers at the University of Colorado Boulder and the Belgian Institute for Space Aeronomy.

"We found that nitrous acid levels in wildfire plumes worldwide are two to four times higher than expected," said Rainer Volkamer, an atmospheric chemist at CU Boulder and co-lead author of a paper published in Nature Geoscience. "The chemical can ultimately drive the formation of lung- and crop-damaging ozone pollution downwind of fires."

Nitrous acid in wildfire smoke is accelerating the formation of an oxidant, the hydroxyl radical, or OH. Unexpectedly, nitrous acid was responsible for around 60% of OH production in smoke plumes worldwide, the team estimated. It is by far the main precursor of OH in fresh fire plumes.

The hydroxyl radical can accelerate the chemical production of ozone pollution by as much as 7 parts per billion in some places. That's enough to push ozone levels over regulated levels.

"Fire size and burn conditions in the real world show higher nitrous acid than can currently be explained based on laboratory data, and this added nitrous acid drives faster chemistry to form ozone oxidants and modifies aerosols in wildfire smoke," Volkamer said.

Nitrous acid, while abundant after wildfires, degrades quickly in sunlight and is therefore difficult to study globally. So the CU Boulder team worked with European colleagues to combine two sets of data: global measurements from a satellite instrument that observed nitrous acid in wildfire plumes around the world, and custom instruments flown on aircraft during a wildfire study in the Pacific Northwest.

The scientists compared near-simultaneous measurements – those made by a satellite looking down on a wildfire plume, and by an aircraft-based instrument looking up into the same plume.

"This research is important for gaining a better understanding of how wildfire emissions affect human health," said Sylvia Edgerton, a program director in NSF's Division of Atmospheric and Geospace Sciences. "Increased ozone pollution due to wildfires can adversely affect those with asthma, bronchitis, emphysema and other conditions that result in impaired lung function."