Finding suggests that carbon can be released more easily 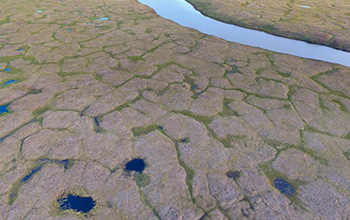 An aerial image of ice wedge polygons next to Kaktovik Lagoon, Alaska.

If you flew from the sea toward the land along the north slope of Alaska, you would cross from the water, over a narrow beach, and then to the tundra. From the air, that tundra would look like a landscape of room-sized polygonal shapes. Those shapes are the surface manifestations of the ice in the frozen ground -- the permafrost -- below.

Scientists long thought that solid permafrost extended offshore from the tundra, below that narrow beach and below the seafloor, declining at a gentle slope. They viewed the permafrost like solid brick, locking the subsurface -- and the vast amounts of carbon it holds -- in place.

New research led by Micaela Pedrazas at the University of Texas at Austin has upended that paradigm. She and colleagues found permafrost to be mostly absent throughout the shallow seafloor along a coastal field site in northeastern Alaska. The finding means that carbon can be released from coastline sources much more easily than previously thought.

Using a geophysical technique called electrical resistivity imaging, the researchers mapped the subsurface beneath Kaktovik Lagoon along the northeastern coast of Alaska over three years.

The results were unexpected. The beach and seafloor were entirely ice-free down to at least 65 feet. On the tundra itself, ice-rich permafrost was detected in the top 16 feet but, below that, the subsurface was also ice-free.

Permafrost is found in cold climates where soils remain frozen during the year. Scientists have been tracking the impact of a warming climate on permafrost because, as it melts, permafrost releases its stores of frozen carbon into the atmosphere as methane and carbon dioxide, contributing to climate change.

Permafrost studies have almost exclusively focused on the region beneath the tundra. Because it's not easy to work in such remote locations and under harsh weather conditions, the transition from sea to shore in Arctic coastal areas has been largely understudied.

"In addition to releasing carbon, thawing permafrost accelerates coastal erosion with increasing risks for local residents and their homes and infrastructure," says Roberto Delgado, a program director in NSF's Office of Polar Programs. "It's important to understand these processes along the Arctic coastline."