For the first time, researchers have mapped the biological diversity in marine sediment 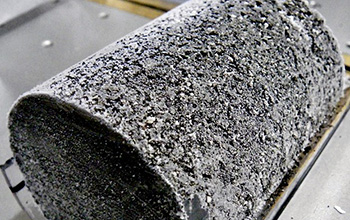 A sediment core, frozen for microbiological analysis. DNA was extracted from the frozen core.

For the study, funded in part by the U.S. National Science Foundation and published in Proceedings of the National Academy of Sciences, Tatsuhiko Hoshino, senior researcher at the Japan Agency for Marine-Earth Science and Technology, and his colleagues, including University of Rhode Island scientist Steven D'Hondt, analyzed 299 samples of marine sediment collected as core samples from 40 sites around the globe. The samples were obtained as part of the International Ocean Discovery Program.

Their sample depths ranged from the seafloor to 678 meters (740 yards) below. To accurately determine the diversity of microbial communities, the authors extracted and sequenced DNA from each frozen sample under the same clean laboratory conditions.

By combining the estimates of bacterial and archaeal diversity for the biomes, the scientists discovered that bacteria are far more diverse than archaea -- microbes distinct from bacteria and known for living in extreme environments.

Added Mike Sieracki, a program director in NSF's Division of Ocean Sciences, "We knew there was a significant biomass of microbes under the seafloor. Now we know the microbes are very diverse as well."