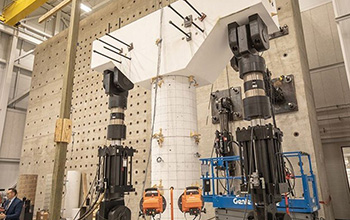 Researchers can now quantify the benefits of new bridge designs that are earthquake-resistant.

Structural damage to any of the nation's ailing bridges can come with a hefty price of billions of dollars in repairs. New bridge designs promise more damage-resistant structures and, consequently, lower restoration costs. But predicting damage risks and potential repair strategies is challenging for designs that haven't been implemented in the real world.

In a U.S. National Science Foundation-funded study published in the Journal of Structural Engineering, researchers at Texas A&M University and the University of Colorado Boulder conducted a comprehensive damage and repair assessment of a still-to-be-implemented bridge design that relies on limb-inspired joints and segments.

The engineers said their method offers a unique and robust technique for evaluating the feasibility of bridge designs that are still at an early phase of research and development.

Most bridges are monolithic systems made of concrete poured over forms that give the bridges their shapes. The bridges are strong enough to support their own weight and other loads, such as traffic. However, if there is unexpected seismic activity, the structures could crack, and remedying the damage would be exorbitantly expensive.

To overcome these problems, the research team has developed a new design called a hybrid sliding-rocking bridge. Instead of a monolithic design, these bridges are made of columns containing limb-inspired joints and segments.

In the event of an earthquake, the joints allow some of the energy from the ground motion to spread while the segments move slightly, sliding over one another rather than bending or cracking. The team found that columns built with the design sustained less damage overall compared with bridges built according to conventional designs.

In fact, the columns showed very little damage even when subject to motions reminiscent of a powerful once-in-a-few-thousand-years earthquake. And the damage could be repaired relatively quickly with grout and carbon fibers, suggesting that no special strategy was required for restoration.