Revelation may lead to cleaner-burning fuels 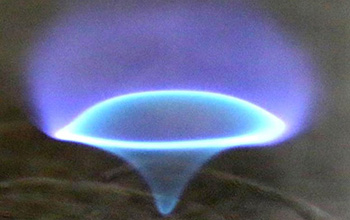 Researchers have identified the structure of a "blue whirl," an avenue for low-emission combustion.

Lightning struck a bourbon warehouse, setting fire to a cache of 800,000 gallons of liquor in the Bardstown countryside of Kentucky in 2003. Some of it spilled into a nearby creek, spawning a massive fire tornado.

Aerial video of the tornado inspired scientists to investigate fire whirls -- tornadoes of fire -- as promising for oil spill remediation because the alcohol burned with relatively little soot.

The U.S. National Science Foundation-funded researchers' fire whirl investigations led them to something that astonished them. The chaotic and dangerous fire whirl transformed into a tame and clean burning flame they call a "blue whirl."

One of its discoverers is now on a science team using supercomputers allocated by the Extreme Science and Engineering Discovery Environment, XSEDE, to reveal the structure of the blue whirl, a new type of flame that consists of four separate flames. The scientists hope blue whirls can one day be used to burn fuels more cleanly.

"The main finding of this new computational study is that we now know the main structure of the blue whirl," said Elaine Oran of Texas A&M University. Oran is a co-discoverer of the blue whirl and a co-author of a study on its structure. "We know that it's a combination of many types of flames that come together and form into probably the most ideal configuration for burning."

A blue whirl is akin to a spinning blue flame that looks like a child's toy top. Oran says it has the same shape as the sorting hat from Harry Potter. Most of its burning is along a very bright blue rim that spins.

"This is a great example of basic research leading to an unanticipated and useful outcome," said John Daily, a program director in NSF's Directorate for Engineering.