Scientists have discovered an ancient lakebed deep beneath the Greenland ice

Inaccessible for now, unique site may hold secrets of the past 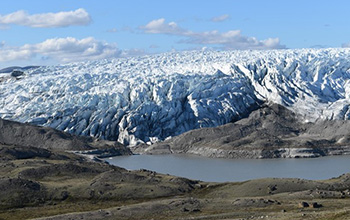 A lake near the Greenland ice sheet, exposing sediments. Such lakebeds are more common as ice melts.

Scientists have detected what they say are the sediments of a huge ancient lakebed sealed more than a mile beneath the ice of northwest Greenland -- the first-ever discovery of such a sub-glacial feature anywhere in the world.

It apparently formed at a time when the area was ice-free. It’s now completely frozen. The lakebed may be hundreds of thousands to millions of years old, and contain unique fossil and chemical traces of past climates and life.

Scientists consider the discovery vital to understanding what the Greenland ice sheet may do in coming years as climate warms. A paper describing the discovery is in press at the journal Earth and Planetary Science Letters.

"This could be an important repository of information, in a landscape that right now is totally concealed and inaccessible," said Guy Paxman, a researcher at Columbia University's Lamont-Doherty Earth Observatory and lead author of the report. "We're working to understand how the Greenland ice sheet has behaved in the past. It's important if we want to understand how it will behave in future decades."

The ice sheet, which has been melting at an accelerating pace in recent years, contains enough water to raise global sea levels by about 24 feet.

The U.S. National Science Foundation-funded researchers mapped out the lakebed by analyzing data from airborne geophysical instruments that read signals penetrating ice. The results provide images of the geologic structures below.

The team says the basin once hosted a lake covering about 7,100 square kilometers (2,700 square miles), about the size of the U.S. states of Delaware and Rhode Island combined.