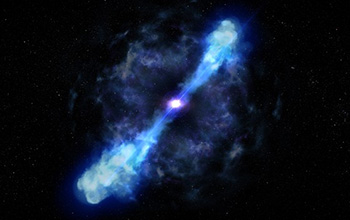 A neutron star merger resulted in a magnetar with the brightest kilonova ever observed.

Long ago and far across the universe, an enormous burst of gamma rays unleashed more energy in a half-second than the sun will produce over its entire 10-billion-year lifetime.

After examining the incredibly bright burst with optical, X-ray, near-infrared and radio wavelengths, a Northwestern University-led astrophysics team believes it potentially spotted the birth of a magnetar.

The researchers, funded in part by the U.S. National Science Foundation, believe the magnetar was formed by two neutron stars merging, which has never before been observed. The merger resulted in a brilliant kilonova -- the brightest ever seen -- whose light finally reached Earth on May 22, 2020. The light first came as a blast of gamma-rays, called a short gamma-ray burst.

"When two neutron stars merge, the predicted outcome is that they form a heavy neutron star that collapses into a black hole within milliseconds or less," said Wen-fai Fong, who led the study. "Our research shows that for this particular short gamma-ray burst, the heavy object survived. Instead of collapsing into a black hole, it became a magnetar, a rapidly spinning neutron star that has large magnetic fields, dumping energy into its surrounding environment and creating the very bright glow we see."

The research has been accepted by The Astrophysical Journal and will be published online later this year.

A kilonova, which is 1,000 times brighter than a classic nova, is expected to accompany short gamma-ray bursts. Unique to the merger of two compact objects, kilonovae glow from the radioactive decay of heavy elements ejected during the merger, producing coveted elements like gold and uranium.

"We only have one confirmed and well-sampled kilonova to date," said Jillian Rastinejad, a co-author of the paper. "It is especially exciting to find a new potential kilonova that looks so different. This discovery gave us the opportunity to explore the diversity of kilonovae and their remnant objects."

Added Hans Krimm, a program director in NSF's Division of Astronomy, "This work relates directly to NSF's Big Idea on multi-messenger astrophysics, and showcases how much can be gained from combining observations from space-based and ground-based telescopes."