Climate change would expose millions to severe flooding in continental US 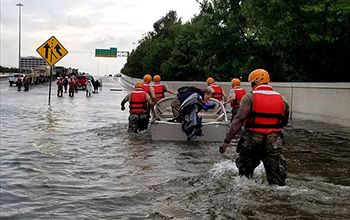 First responders from across the U.S. came to the rescue during floods from Hurricane Harvey's rains

That's what would happen in a scenario in which greenhouse gas emissions continue to increase at a rapid rate in a high-warming scenario. Extreme rainfall events, the so-called hundred-year storms, would then be likely to occur once every 33 years.

A paper reporting the results, published in the American Geophysical Union journal Earth's Future, states that warming has a more profound effect on both the severity and frequency of extreme precipitation events than it does on common precipitation events.

The findings have serious implications for how we prepare for the future, co-author UCLA climate scientist Daniel Swain said.

"The five-year flood, the 10-year flood -- those aren't the ones that cause huge amounts of damage and societal disruption," said Swain. "That comes when you get 50- or 100-year floods, the low-probability but high-consequence kinds of events."

The researchers predict extreme precipitation increases for the entire continental United States, but some areas are expected to see bigger relative increases than others, including the West Coast and the hurricane-prone Southeast.

James Done, a co-author of the paper and a climate scientist at the National Center for Atmospheric Research, said further work is required to understand why extreme events are increasing more rapidly than less extreme ones.

"It's not just because of a shift in the distribution of the flooding," Done said. "There's something else that's reshaping the most extreme of the very dangerous rainfall events."

The precipitation changes predicted are already beginning, he added. The nation's infrastructure -- from flood control channels to concrete-heavy urban designs that drain slowly -- were not designed for the scenarios that are now likely to occur.

"This basic research is enhancing our understanding of the fundamental processes underlying flooding hazards and extreme rainfall events, and could lead to enhanced societal preparedness and resilience against flooding impacts," said Justin Lawrence, a program director in NSF's Division of Earth Sciences.