Neurons stripped of their identity are hallmark of Alzheimer's disease, study finds

Changes in the structure of chromatin hold new answers 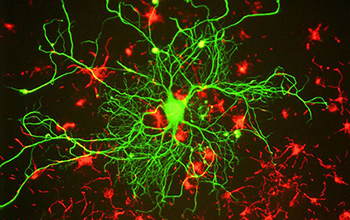 Neurons stripped of their identity are hallmarks of Alzheimer's disease, researchers have found.

Researchers at the University of California San Diego have identified new Alzheimer's disease mechanisms in neurons. The scientists have discovered that changes in the structure of chromatin, a tightly coiled form of DNA, trigger neurons to lose their specialized function and revert to an earlier cell state. That results in the loss of synaptic connections, an effect associated with memory loss and dementia.

The study was founded on the question: How do neurons in patients with Alzheimer's disease differ from neurons in healthy individuals?

"It's a fundamental question that would provide the framework and foundation for understanding Alzheimer's disease at the cellular level, and pave the path for novel therapeutic approaches," said bioengineer Shankar Subramaniam.

Subramaniam worked with an interdisciplinary team of engineers and neuroscientists at UC San Diego to answer this question. They started by taking human induced pluripotent stem cells derived from patients with familial Alzheimer's disease, a hereditary form of Alzheimer's, and transformed them into neurons.

The scientists then used next-generation sequencing techniques to look at which genes are being expressed in the neurons and how gene expression is regulated, then compared how they differ in the neurons of healthy individuals.

The bioengineers discovered that neurons derived from the affected patients revert to a precursor state. "In other words, they cease to be neurons," Subramaniam said. "This is the key defect observed across a diversity of patients with distinct mutations. The consequences to the brain are dramatic, with loss of synaptic connections leading to cognitive decline."

The researchers traced all the mechanisms to changes in the structure of chromatin. Parts of this structure consist of open regions, where genes are expressed or regulated, and other parts consist of closed regions, where gene expression is repressed. In the diseased neurons, some regions that were open became closed, and vice versa. As a consequence, the neurons are not behaving as they should be, Subramaniam explained.

The team is now working on developing drugs to inhibit these mechanisms.

"The lessons gleaned from examining large-scale connectivity have fascinating implications beyond communication networks, including brain connectivity in neural studies, with the potential to impact the quality of life," said Phil Regalia, a program director in NSF's Directorate for Computer and Information Science and Engineering.