Fossils provide the oldest evidence of a slingshot-style tongue 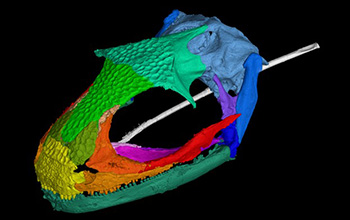 Despite having lizardlike claws, scales and tails, albanerpetontids -- called "albies" for short -- were amphibians, not reptiles. Their lineage was distinct from today's frogs, salamanders and caecilians and dates back at least 165 million years, dying out only about 2 million years ago.

Now, a set of 99-million-year-old fossils redefines these tiny animals -- they were not, as once thought, underground burrowers, but rather sit-and-wait predators that snatched prey with a projectile firing of their tongue. The fossils, one previously misidentified as an early chameleon, are the first albies discovered in modern-day Myanmar.

They also represent a new genus and species: Yaksha perettii, named after treasure-guarding spirits known as yakshas in Hindu literature and Adolf Peretti, the discoverer of two of the fossils.

"This research adds a piece to the puzzle of this obscure group of weird little animals," said study co-author Edward Stanley, director of the Florida Museum of Natural History's Digital Discovery and Dissemination Laboratory. "Knowing they had this ballistic tongue gives us a whole new understanding of this entire lineage."

Once classified as salamanders, albies' skulls -- reinforced and stippled -- led many scientists to hypothesize that they were diggers. No one imagined them as having chameleonlike lifestyles, Stanley said. But, he added, "If you're going to misidentify an albie as any kind of lizard, a chameleon is absolutely what you would land on."

Even though one is an amphibian and the other a reptile, they share several features, including claws, scales, massive eye sockets and, as we now know, a projectile feeding mechanism.