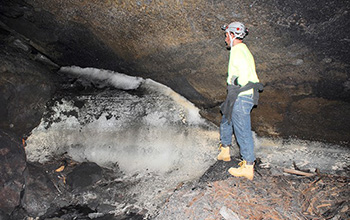 A lava tube yields centuries-old insights of survival in the face of harsh climate change.

For more than 10,000 years, the people who lived on the arid landscape of modern-day western New Mexico were renowned for their complex societies, unique architecture and early economic and political systems. But surviving in what Spanish explorers would later name El Malpais, or the "bad lands," required ingenuity now explained for the first time by a team led by University of South Florida geoscientists.

Dating back as far as AD 150 to 950, these water-gatherers left behind charred material, indicating that they started small fires to melt the ice to collect as drinking water, or perhaps for religious rituals. The researchers published their discovery in the journal Scientific Reports.

"This discovery sheds light on one of the many human-environment interactions in the Southwest at a time when climate change forced people to find water resources in unexpected places," Onac said, noting that the geological conditions that supported the discovery are now threatened by modern climate change.

"The melting cave ice under current climate conditions is both uncovering and threatening a fragile source of paleoenvironmental and archaeological evidence," he added.

Onac specializes in exploring the depths of caves around the world, where ice and other geological formations and features provide a window to past sea level and climate conditions and add context to today's climate challenges.