Findings become a reference point for the origin of the horse, rhino and tapir 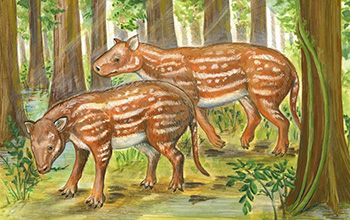 A life reconstruction of Cambaytherium in long-ago habitat.

New research published in the Journal of Vertebrate Paleontology describes a fossil family that illuminates the origin of perissodactyls -- the group of mammals that includes horses, rhinos and tapirs. It provides insights on the question of where these hoofed animals evolved, concluding that they arose in or near present-day India.

With more than 350 new fossils, the study pieces together a nearly complete picture of the skeletal anatomy of the Cambaytherium -- extinct cousins of perissodactyls that lived on the Indian subcontinent almost 55 million years ago.

Among the findings of the U.S. National Science Foundation-funded research is a sheep-sized animal with moderate running ability and features that were intermediate between specialized perissodactyls and their more generalized mammal forerunners.

A comparison of its bones with many other living and extinct mammals revealed that Cambaytherium represents an evolutionary stage more primitive than any known perissodactyl, supporting that the origin for the group was in or near India -- before Cambaytherium dispersed to other continents when the land connection with Asia formed.

Cambaytherium is the most primitive member of an extinct group that branched off just before the evolution of perissodactyls, providing scientists with unique clues to its ancient origins and evolution.

"The modern orders Artiodactyla [even-toed ungulates], Perissodactyla and Primates appeared abruptly at the beginning of the Eocene around 56 million years ago across the Northern Hemisphere, but their geographic source has remained a mystery," explained lead author of the study Ken Rose of Johns Hopkins University.

Through the cumulation of years of fieldwork, the team can finally shed light on a mammal mystery. Despite the abundance of perissodactyls in the Northern Hemisphere, Cambaytherium suggests that the group likely evolved in isolation in or near India during the Paleocene (56-66 million years ago), before dispersing to other continents when the land connection with Asia formed.