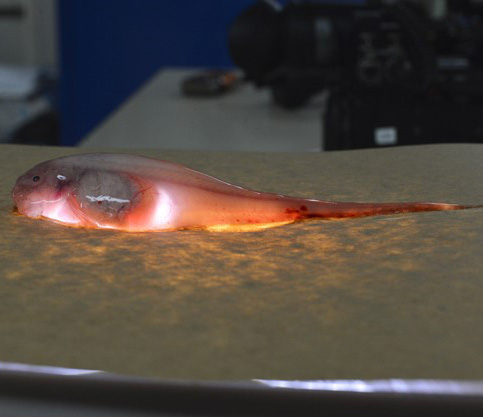 An illuminated snailfish collected from the Kermadec Trench in the southwest Pacific Ocean.

The sinking carcasses of fish from near-surface waters deliver toxic mercury pollution to the most remote and inaccessible parts of the world's oceans, including the deepest spot of them all: the 36,000-foot-deep Mariana Trench in the northwest Pacific.

Most of that mercury began its long journey to the deep-sea trenches as atmospheric emissions from coal-fired power plants, mining operations, cement factories, incinerators and other human activities.

Those are the conclusions of a University of Michigan-led research team that analyzed the isotopic composition of mercury in fish and crustaceans collected at the bottom of two deep-sea trenches. The team reports its findings in a U.S. National Science Foundation-funded study published in Proceedings of the National Academy of Sciences.

"Mercury that we believe had once been in the stratosphere is now in the deepest trench on Earth," said University of Michigan environmental geochemist Joel Blum, lead author of the paper.

"It was widely thought that anthropogenic mercury was mainly restricted to the upper 1,000 meters of the oceans, but we found that, while some of the mercury in these deep-sea trenches has a natural origin, it is likely that most of it comes from human activity."

In their paper, Blum and his colleagues suggest that sinking carrion from fish that feed in the upper ocean delivers most of the mercury to the trenches.

To determine how seafood is likely to be impacted, researchers rely on global models. And refining those models requires the clearest possible understanding of how mercury cycles within the oceans, and between the oceans and the atmosphere, according to Blum.

"Yes, we eat fish caught in shallower waters, not from deep-sea trenches," he said. "However, we need to understand the cycling of mercury through the entire ocean to be able to model future changes in the near-surface ocean."