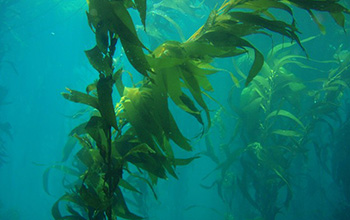 Scientists are evaluating the potential for kelp to mitigate ocean acidification.

Ethereal, swaying pillars of kelp along California's coasts grow up through the water, to form a dense surface canopy of thick fronds that provide homes for numerous marine creatures.

Scientists have speculated that these giant algae may also protect coastal ecosystems by alleviating acidification caused by too much atmospheric carbon absorbed by the sea.

A new U.S. National Science Foundation-funded analysis of giant kelp in Monterey Bay on the coast of California investigated kelp's acidification mitigation potential. "We talk about kelp forests protecting the coastal environment from ocean acidification, but under what circumstances is that true?" asked researcher Heidi Hirsh of Stanford University.

The team's findings, which appear in the journal JGR Oceans, show that near the ocean's surface, the water's pH is slightly higher, or less acidic, suggesting the kelp canopy does reduce acidity. However, those effects did not extend to the ocean floor, where sensitive cold-water corals, urchins and shellfish dwell and where the most acidification has occurred.

"One of the main takeaways is the limitation of the potential benefits from kelp productivity," said Hirsh.

Kelp is an ecologically and economically important foundation species in California, where forests of the seaweed line nutrient-rich, rocky bottoms. A detrimental effect of increased carbon in the atmosphere is its subsequent absorption by the oceans, which causes acidification -- a chemical imbalance that can affect the overall health of marine ecosystems.

Kelp has been targeted as a potentially ameliorating species in part because of its fast growth -- up to 5 inches per day -- during which it undergoes a large amount of photosynthesis, producing oxygen and removing carbon dioxide from the water.