Possible straw that 'breaks the camel’s back' for reefs 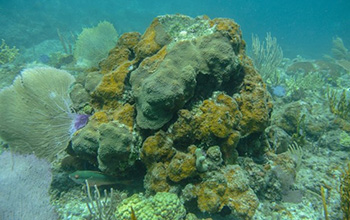 Hurricanes, pollution, disease, bleaching and the effects of an increasingly warmer planet are affecting the health of coral reefs around the world. However, reefs in the Caribbean are facing a new threat -- an aggressive, crust-like algae that is rapidly overgrowing them.

California State University, Northridge, marine biologist Peter Edmunds and a team of researchers said the algae, known as peyssonnelid algal crusts (PAC), are taking over the reefs at such an aggressive rate they are interfering with the ability of coral larvae to find places to settle and interfering with the reef's natural ecosystem.

A paper on the U.S. National Science Foundation-funded research appears in the journal Scientific Reports.

Edmunds noted that PAC, with its dark brown and dirty orange veneer, stands out among the white sands and light greens, pinks, yellows and other colors that make up the reef.

The researchers are not sure if PAC is made up of one algae species or several, nor do they know what is causing the algae to be so aggressive.

"What we do know is that this is an alarming trend, and one that we need to know more about," he said. "The coral and their ecosystem are so fragile as it is. They are under assault by environmental pollution and global warming. And now this gets thrown into the mix. We don’t know if this is the straw that 'breaks the camel’s back,' but we need to find out."

Added Dan Thornhill, a program director in NSF's Division of Ocean Sciences, "Coral reefs are in severe decline throughout the Caribbean. The list of problems is long and growing. Peyssonnelid algal crusts are yet another troubling issue for the reefs of the U.S. Virgin Islands, on top of all the other challenges faced by these iconic and productive ecosystems."