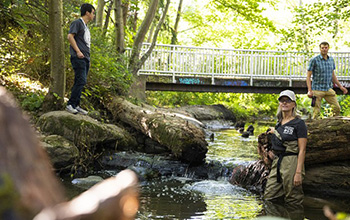 Researchers have discovered a chemical that kills coho salmon in urban streams.

Every fall, more than half the coho salmon that return to Puget Sound's urban streams die before they can spawn. In some streams, all die. But scientists didn't know why.

Now, a U.S. National Science Foundation-funded research team at the University of Washington Tacoma and Washington State University Puyallup has discovered the answer. When it rains, stormwater flushes bits of aging vehicle tires on roads into neighboring streams. The killer is in the mix of chemicals that leaches from tire wear particles: a molecule related to a preservative that keeps tires from breaking down too quickly.

This research was published in the journal Science.

"Most people think that we know what chemicals are toxic, and all we have to do is control the amount of those chemicals to make sure water quality is fine," said co-senior author Edward Kolodziej of UW. "But, in fact, animals are exposed to this giant chemical soup and we don't know what many of the chemicals in it even are."

"Here, we started with a mix of 2,000 chemicals and were able to get all the way down to this one highly toxic chemical, something that kills large fish quickly and we think is probably found on every single busy road in the world."

Coho salmon are born in freshwater streams. After spending the first year of their lives there, the fish make an epic journey out to sea, where they live most of their adult lives. A few return to their original streams to spawn before dying. But researchers started noticing that, especially after a big rain, returning salmon were dying before they could spawn. Now, the scientists know why.

"This research shows that we not only need to worry about the environmental effects of products like rubber and plastic, but also the many other chemicals that are part of the original mix," said Anne-Marie Schmoltner, a program director in NSF's Division of Chemistry. "They can be very dangerous even in small quantities."

Added Karl Rockne, a program director in NSF's Directorate for Engineering, "While this research can be likened to a detective story, it is actually much more difficult as the scientists did not know ahead of time whether there was one or many culprits. The difficulty in identifying a single compound in this mixture cannot be overstated."